Some History of the Catholic Church in Cranbourne: Alipius Goold 1861

Why was our parish dedicated to the Sicilian martyr, Agatha? There does not appear to be a definitive answer to this question, but if one reflects on the history of the Church in Victoria and Australia, it is possible to see several influences at work.

The early Australian church for example, was essentially imported from Europe, and if it were to have any epithets, then they would be Irish, Roman or a combination of both. This was due to the Catholic hierarchy in Australia being largely dominated by Irish bishops who had often been educated in Rome. How then, did this Irish/Roman influence translate to the parish of St Agatha’s in Cranbourne?

James Alipius Goold, who would eventually dedicate the new chapel in Cranbourne to St Agatha, was Victoria’s first bishop and fits this category well. Born in Cork, Ireland on 4th November 1812, he entered the Augustinian novitiate in in 1830 and was professed on 30th March 1832. He would later travel to the Augustinian seminary in Perugia, Italy and was ordained a priest there on 19th July 1835. Further studies took him to Rome, Viterbo and Rome again. In 1837, on the steps of the Augustinian church Santa Maria del Popolo, which he would often frequent, Goold would encounter Rev Dr. Ullathorne who would invite him to become a missionary under Bishop Polding’s jurisdiction in NSW. After gaining the approval of his superiors, he would arrive in Sydney on 24th February 1838. He was later consecrated bishop in St Mary’s Cathedral Sydney on 6th August 1848 and appointed to the newly created Diocese of Melbourne. His diocese was vast, encompassing the whole of Victoria. Goold would also undertake a further five overseas journeys from Victoria ensuring a lasting connection to the wider Church.

The five years he spent in Rome, as well as the subsequent trips, would have been influential in several ways. The development of his appreciation of church art and architecture is an example, for as his diaries reveal, he had much enthusiasm for the Gothic style. One however, could not ignore the fact that the Irish College in Rome, at the time Goold was there, was established at the church of St Agata dei Goti (St Agatha of the Goths). This was a church in Rome dedicated to the martyr St Agatha of Sicily. The church was originally built for the Goths c. 460. The Goths at the time followed the heretical movement known as Arianism: believing the concept that the Son of God did not always exist, that there was a time when he was created by God the Father. When Arianism was suppressed in Rome, the building was taken over by the Catholic Church c. 592 and reconsecrated by Pope Gregory the Great. Various parts of the Church have been rebuilt over time. The church itself is not far (about 30 minutes walk) from the Santa Maria del Popolo, and the archives of the Irish College in Rome confirm that Goold had regular contact with its staff and residents. It is interesting to note that there are approximately five churches dedicated to St Agatha in Australia. One of them, Pennant Hills in NSW, notes the probable reason that its Church was dedicated to St Agatha was due to the influence of the Redemptorists, whose order originated in Southern Italy (where St Agatha was from), whilst the parish of St Agatha’s in Clayfield QLD was named so because St Agatha was the patron of the Irish College in Rome. The influence of such matters in Goold’s case cannot therefore be under estimated.

Devotion to St Agatha had generally received Papal support in the early church, and Gregory the Great was no exception, reportedly transferring some relics of St Agatha to the church of St Agata dei Goti. It was most likely the event of the Third Crusade in the twelfth century however, that boosted the international reputation of St Agatha’s cult. The Anglo-French crusading forces spent the winter near Messina in Sicily on their way to face Saladin in the east. It was there that a large number of Europeans, including influential figures in high socio-political circles (e.g. Roger Howden), were exposed to Sicilian traditions and customs which were then carried to the west. At that time, the landscape of Sicily had an almost mystical quality: it was marked by fiery volcanoes and the scars of terrible earthquakes; the dangerous seas surrounding it were supposedly host to well know sea monsters. Some authors at the time even located the gateway to hell or the entrance to purgatory, in Sicily. The region also had a history of a continued presence of Muslim communities as well as pagan undertones. It is into this mix that St Agatha was cast as a protector of Southern Italy. St Agatha therefore represented goodness and purity in a landscape of hell, purgatory, sinister natural forces and pagan communities. This understanding of her was most likely circulated widely across Europe and enabled her to stand as a protector of the faith in strange, challenging and sinister lands. Her courage and spirit fostered a cult of worship all over Christendom; she was noted for her courage in suffering.

As a result of the spreading devotion to St Agatha, some historians consequently report that devotion to the saint was popular throughout Britain and Ireland; including her in a grouping of the most popular saints prior to and following the effects of the Reformation through the region (this would have also had an impact on the Redemptorists mentioned earlier who came to Australia from England).

It is reasonable to assume therefore, that Goold, as Bishop and therefore the person with the final say over the naming of a Church in his diocese, would have been very familiar with the devotion to St Agatha of Sicily. One should also not discount the input of the local community here too, for as per the previous discussion, the early settlers in Cranbourne, being largely of Irish / English heritage, would also have been familiar with devotion to St Agatha; particularly too as a protector of the faith in the strange, challenging and often hostile land that Australia was. 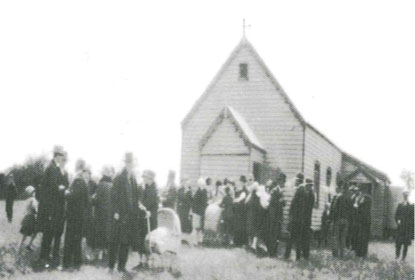 When Goold would therefore leave Melbourne on Tuesday 5th February 1861 at 11:00am (the feast day of St Agatha of Sicily) and arrive in Cranbourne at 6:00pm that same day, it is no surprise that on Wednesday 6th February, he would dedicate the new chapel there to St Agatha. According to his diary he noted it as a handsome wooden building and held a Retreat there, heard Confessions, as well as conducting prayer and instruction. The next day he also went to the chapel, recited his Office, heard Confessions and gave Confirmation instructions. According to his diary he would lament that the parents there do not send their children to school. The old timber church was in fact the first erected in the district.